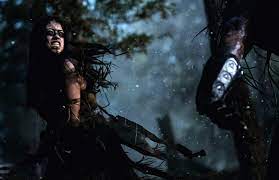 Imagine you’re a filmmaker. You have an idea. It feels like a good one, a very good one. You start writing, and after multiple screenplay drafts, you think you’re in good shape. Then, after assembling a cast and crew, you begin the Sisyphean task of making the movie. Amazingly, you finish without having too many nervous breakdowns. Then, you oversee the editing. After all that, your creation is released into the world, and…people love it! Your movie becomes both beloved and profitable.

What happens next? Everybody wants a sequel. Your success is the good news, but the bad news is that sequels are hard. What did people respond to? The characters? Action? Lore? Actors? If your sequel is too similar to the original, people will piss and moan that it’s just a cash grab. If it’s too different, people will bitch that you don’t care about the “real” fans.

Predator was released in 1987 and as far as ideas for movies go, it’s a doozy. Consider that the film is about Arnold Schwarzenegger as the leader of a military rescue team. While his team is on an op in Central America, they discover they’re being hunted. Their pursuer is an alien that’s bigger, stronger, and more technologically advanced than they are. As a result, Arnold must use guile and stealth to survive.

As you’re no doubt aware, Predator was a hit. So much so that it spawned a franchise. Were all of the installments up to the lofty standards of the original? Not so much!* After the 2018 installment The Predator underperformed at the box office, there was concern that the franchise had been killed deader than Jesse Ventura’s character Blain. However, like Gary Busey’s character Keyes, the franchise has unexpectedly sprung back to life with the excellent prequel Prey. 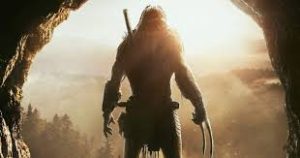 Nobody takes Naru (Amber Midthunder) seriously. At least, not in the way she wants. She’s not a legal student in the 1960s clawing her way to respectability, nor is she a Silicon Valley programmer battling the bro culture. Instead, she lives in the Great Plains in the year 1719 as a member of the Comanche nation. While she’s a skilled tracker and a more than competent healer, what she really wants is to be a hunter.

Naru can feel that the time is coming for her to prove herself and join the ranks of her tribe’s hunters. Her brother Taabe (Dakota Beavers) loves her, though he thinks she’s wasting her time. Regardless, he reluctantly allows her to join a search party to find a member of the tribe who was attacked by a mountain lion. With her canine companion Sarii,** Naru accompanies them into the wild.

What Naru is waiting for is a sign, some kind of an omen that she’s ready to be tested. The omen arrives in the form of…well, something. Naru thinks it’s a thunderbird, lighting up the sky. She tells the other hunters, and you will not be surprised to learn that they immediately blow her off. She’s mocked for not being as strong as the men, yet they fail to consider that what she lacks in strength, she more than makes up for in observation and deduction. She notices that something has killed a rattlesnake in a very odd way. She spies tracks that could not have been caused by a mountain lion or bear, or really anything on this planet. 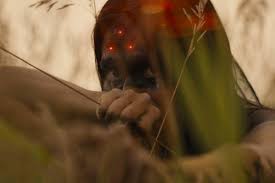 Naru has far bigger problems than just a mountain lion. The hunting party has attracted the attention of another hunter, one that’s not from around here. It’s methodically working its way up the ecosystem to determine what the apex predator is, and to its delight, it discovers that man is the most dangerous game.

2022 continues to be an excellent year for genre films and the only real complaint I have with Prey is that it should have gotten a wide theatrical release instead of heading straight to streaming on Hulu.*** Director Dan Trachtenberg has made a juggernaut of a film without an ounce of fat. Early scenes are used wisely for character development, to introduce us to the world of the Comanche, and to establish the arrival of the Predator. Once Naru starts doing battle with the fiendish thingy, the film takes off like a rocket. Trachtenberg sets up and pays off a number of strong set pieces, and the action is clearly and cleanly shot. The gorgeous scenery aids him in Alberta which helps to establish a sense of place as effectively as the Central American jungles in the original Predator.

Screenwriters Patrick Aison and Trachtenberg also made a very wise choice in terms of the story. Previous installments have provided more information about the Predator mythos and the fact still remains that nobody cares about that. For a Predator movie to work, you need to start by making another kind of iconic action movie, one with a strong central character. Then, the Predator crashes into the story and creates chaos. That’s what happens here, and a period piece/coming-of-age story smashes into a high-octane action/monster movie. Like the original film, Aison and Trachtenberg make sure to give us just enough information about the characters before they’re tossed into the meat grinder. 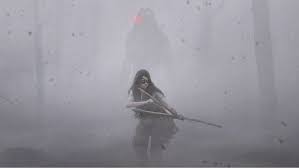 Those characters couldn’t come to life without the right actors, particularly the star-making performance by Amber Midthunder. Naru is far from perfect, and she’s a young woman who’s a little too headstrong. We see her paying attention, learning from her mistakes, and outthinking her opponent instead of relying on brute strength. Basically, the same method Schwarzenegger’s character used to survive. A lesser film would have portrayed her brother Taabe as a retrograde sexist. Dakota Beavers is cannier than that, and his performance is charismatic and nuanced. Special mention must go to DiLiegro as the Predator. Nobody ever said acting while wearing a heavy costume is easy, and DiLiegro utilizes his posture and movement in his solid suit acting. He shows us that this hunter is more low-tech, more feral, and more impulsive than the other Predators that will come to Earth later.

Prey revives a franchise that many, myself included, assumed was dead. From the ashes, it returned, due to a team of smart filmmakers who told a new story with efficiency and intelligence. Dan Trachtenberg, Amber Midthunder, and the rest of the cast and crew made a wildly entertaining film that pays homage to the original but in its own way. That’s impressive.

*In case you’re interested, my current ranking of the franchise:

**The word is that dog actor Coco was a) a Very Good Girl and b) an absolute goddamn disaster in terms of being easy to work with. You can read about the many, many challenges here.

***A few folks have opined that Prey didn’t receive a theatrical release due to being either “too woke” or a film of poor quality. Both of these takes are incorrect and the reality is that it’s due to corporate machinations. You can read about it here.

Tim Brennan
Tim has been alarmingly enthusiastic about movies ever since childhood. He grew up in Boulder and, foolishly, left Colorado to study Communications in Washington State. Making matters worse, he moved to Connecticut after meeting his too-good-for-him wife. Drawn by the Rockies and a mild climate, he triumphantly returned and settled down back in Boulder County. He's written numerous screenplays, loves hiking, and embarrassed himself in front of Samuel L. Jackson. True story.
Tagged: Movie Reivew
OnOklahomaCity.com is a directory and information guide for Oklahoma City, Oklahoma.
Discover the best of Oklahoma City shopping, restaurants, night life, breweries, events, business, outdoors, fun, local life, real estate, transportation, jobs, and schools.
Looking for what to do in Oklahoma City? OnOklahomaCity.com has columnists, and bloggers to keep you up to date on the best of Oklahoma City, Oklahoma.